This project is a collaboration with my colleague Kate Sweetapple, in which we recategorised real birds into new taxonomies based on patterns in their names. We spent the better part of a year reading through 31,500+ names in the International Ornithological Committee World Bird List, searching for bird names with ‘visual potential’ – we trawled the list, species by species, collecting colours, patterns, and other themes that amused us. We call this method exploratory data mining – searching in a particular way, rather than for a particular thing. Through this research process, we came up with five ‘unlikely avian taxonomies’, and visualised these new taxonomies as works on paper.

Spots and stripes appear frequently in bird names. Sometimes literally – the Striped Owl and the Spotted Wood Quail – and others more conceptually – the Zebra Finch and the Dalmatian Pelican. This pair of cut-paper collages was made with scrap paper from our offices. The silhouettes are the actual birds – it took longer to find all the birds (in ‘good’ poses) than it did to cut the final collages. We collected many more spotty and stripy birds than are included in these compositions, but they get the idea across. Limiting the colour palette to black and white emphasises the patterns. Where possible, we implied the name through the placement of the spots/stripes: the Five-striped Sparrow has five stripes across his chest; the Spot-bellied Eagle Owl has a spotty front. Some only make sense in pairs: the Greater and Lesser Striped Swallows; the Little Spotted Kiwi and the Great Spotted Kiwi.

The colour list was by far our largest data set – 3,442 birds categorised into 87 unique colours. Primaries, secondaries, tertiaries. Art school favourites – cadmium and carmine, ochre and ultramarine. We found words we thought were colours but had to look up – flavescent, rufuous, cinerious, fuscous and malachite.

Using a colour spectrum as the organising principle seemed a logical relatively straightforward approach to visualising these bird names. However, we hadn’t considered that our collection varied not only in colour but also hue, making a simple spectrum impossible. There were also colours that were difficult to place: does ‘sand’ belong with yellow, brown or cream; is ‘clay’ more browny-green, reddy-brown or ashy-brown? We opted instead for a gradation that ensured all colours were accounted for. In the list chart, the often poetic bird names are readable: Emerald-bellied Puffleg; Rusty-margined Flycatcher; Dusky Crimsonwing. It presents a rich spectrum does not give a sense of the quantity of birds of each colour – the differing length of the names skews the quantity of space taken per bird. In the dot chart, 1 dot = 1 bird, providing a standard measure. The wheel chart gives an immediate sense of the most frequently used colours. 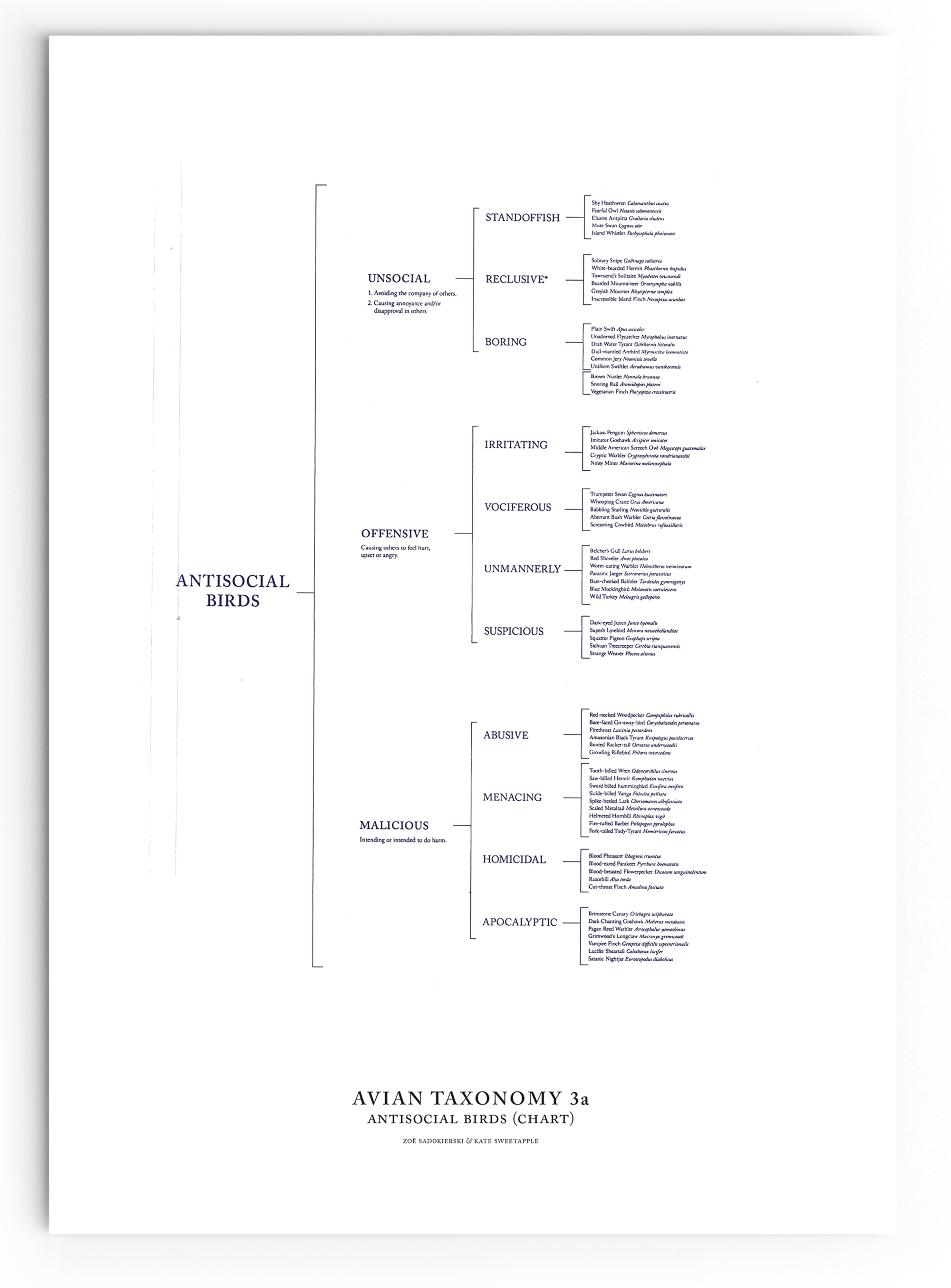 As we collected surprising names, potential categories formed. Boring birds appealed to us – Plain Swift, Common Jery, Unadorned Flycatcher. Obnoxious sounding birds also stood out – the Screaming Cowbird and the Whooping Crane. Violent sounding birds are alarmingly common – the Blood Phesant, the Razorbill, the Cut-throat Finch. Although the Common Jery and the Cut-throat Finch may not immediately seem to belong together, it made sense to us that they were part of a taxonomy of antisocial behaviour, sub-divided into unsocial, offensive and malicious.

This chart is the most ‘taxonomic’ looking. Visually, it threatens to be boring, which makes it more amusing when the words are read. To emphasise the idea that this is a supposed to be an authoritative chart, it was photocopied to blur the edges slightly and printed in the kind of purple associated with old stencil photocopies that we were given in science class.

Birds with moustaches, beards, masks and spectacles are hilarious. Who are they hiding from? The original list included ‘hooded’, ‘caped’ and ‘capped’ but abandoned these when we couldn’t figure out which part of the bird they would go on using only simple shapes. Accessories fit more easily on birds than human clothes. 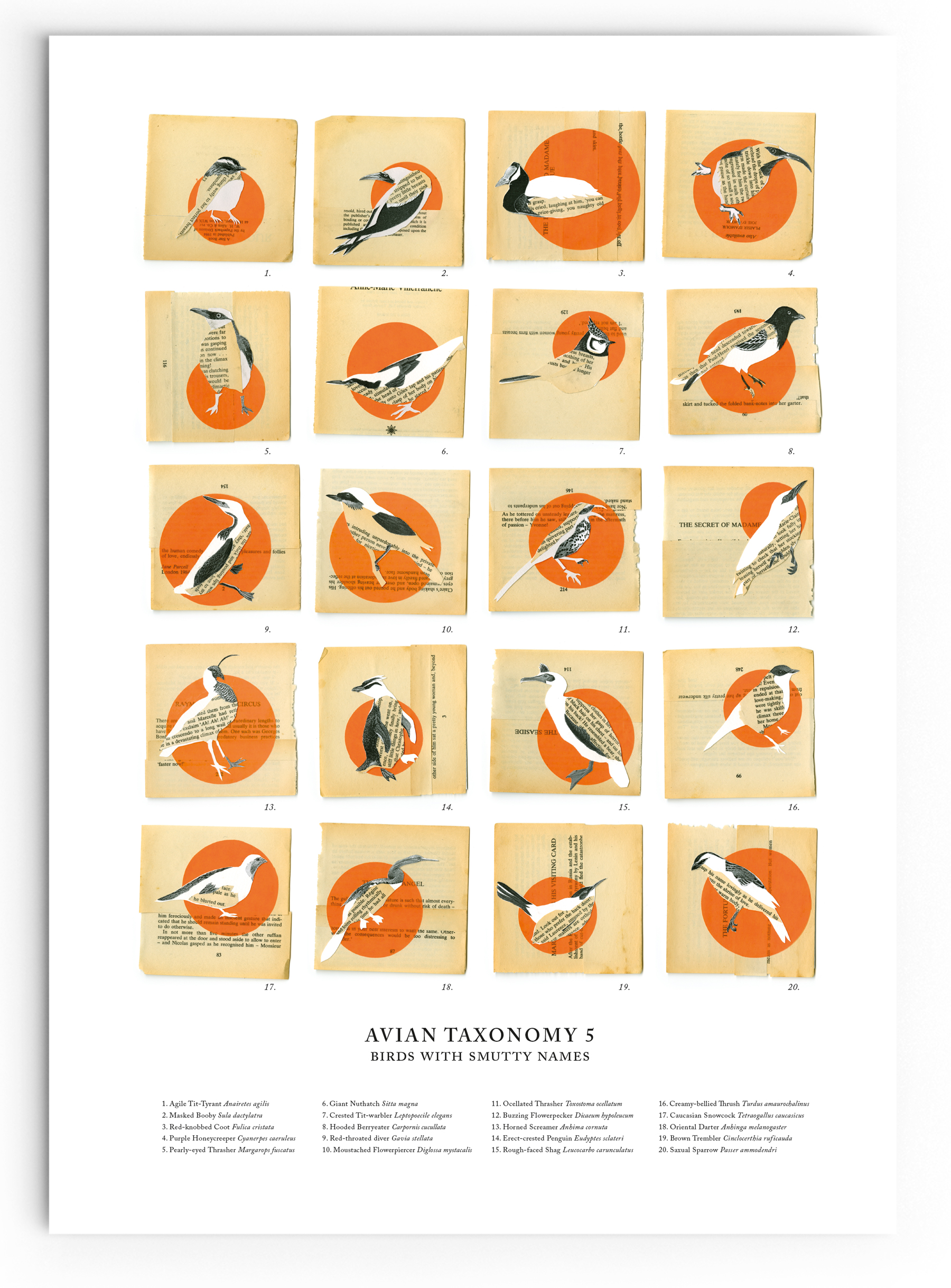 A collaboration between Zoë Sadokierski and Kate Sweetapple, in which we recategorise birds into unlikely taxonomies based on patterns in their names.