is a publishing experiment. These exhibition catalogues, artist books and visual essays are the result of practice-led research by Zoë Sadokierski and her collaborators.

Available to purchase via Amazon

This book documents my research at the MoMA Library looking at, among other things, Edward Ruscha’s artist’s books. Through writing, thumbnail sketches and photographs, I explain how I accidentally became obsessed with Ruscha’s Twenty-six Gasoline Stations, a photobook that follows Route 66 between Oklahoma and Los Angeles. In response to Ruscha’s book, I created the photo series Twenty-six Views from the 7 Train, which follows the train route between the MoMA QNS Library where I was visiting Ruscha’s book and my NYC apartment. Ruscha’s book documents gas stations – markers along a lengthy and often monotonous stretch of road. Although some shots appear to be taken at speed, for the most part the stations are stops on a familiar journey; this was a road Ruscha travelled frequently between his hometown Oklahoma and his adopted home of LA. My photographs capture whatever was outside when I had a clear shot of the train window, which was infrequent, especially in peak hours. Unlike Ruscha, the landscape is unfamiliar to me, even after three return trips. The book belongs to a substantial collection of existing Ruscha-homage books, documented particularly well in the 2013 publication Various Small Books: Referencing Various Small Books by Ed Ruscha and travelling exhibition Ed Ruscha Books & Co. For me, creating the book was a way of thinking through the parallels between how Ruscha and others were using newly inexpensive offset printing to ‘democratise’ their work in the 1960–70s and how artists are using print-on-demand technology today.

The book was written, illustrated and designed in one week. The strange spelling of Ruscha’s commonly mispronounced surname (I thought it was Rush-ah) comes from the title of one of his 1972 catalogue/books: Edward Ruscha (Ed-werd Rew-shay) young artist. The book itself is an experiment in publishing using print-on-demand technology. I’ve previously written about and created a suite of books using online print-on-demand platforms such as Blurb.com and Lulu.com, but the production of this book was different: it was created almost instantly, on a printing and binding machine that sits in a bookstore – McNally Jackson, NYC. It took a little under five minutes from when the bookstore clerk hit print to  the book arriving, still warm, in my hands. Magical. Read more about the process on my blog. 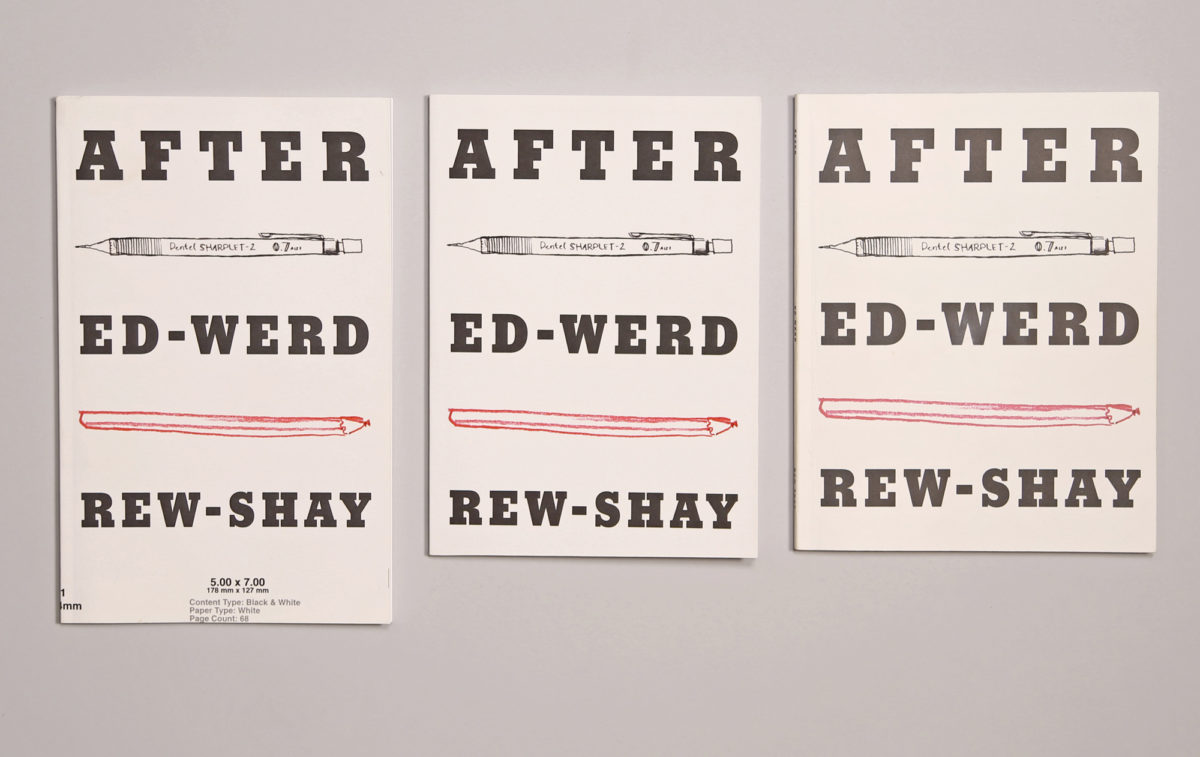 Proving social media is occasionally fruitful, Hermann Zschiegner found the book via an Instagram hashtag and included it in the exhibition Ed Ruscha Books & Co. at Gagosian Gallery Beverly Hills, an exhibition of artist’s books by and after Ruscha in 2016, on the 50th anniversary of Ruscha’s iconic publication Every Building on the Sunset Strip. Below, there’s my baby in LA:

Back to Page Screen Books index